My friend, Alison, is over for a couple of days from the Solomon Islands, our daughters are scarily heading into year 7 next year and she’s over to check out high schools and she suggested we catch up for lunch. I rarely, if ever, leave my desk during the workday, eating at my desk for lunch. Mostly because I always have leftovers, but usually because I’m too tight to spend money on lunches. Like coffees from the coffee shop, it hurts to spend money on these things when I’ve got perfectly acceptable Nescafé in my drawer. Anyway, I suggested to A that we check out the Kingston Foreshore. I don’t go out often, but have read so many reviews of the eateries popping up all along this pretty location. So, she picked me up and off we went, not knowing where we were headed, just that we wanted to check out what all the fuss was about.

We found a park and walked along where we assumed all the restaurants were. Tuesday lunchtime is not a day for pumpin joints and people watching. Not a lot of people about, not a lot open. Having eaten the most fantastic Indian feast for dinner the night before, we didn’t feel like Asian, and then we found C Dine Bar. I’d read really good reviews and the lunchtime menu looked very inviting so we stopped there. Quite clearly we tried to get in the wrong door, but a young lady in jeans opened the door and asked us to come in. Turns out she was the waitress. 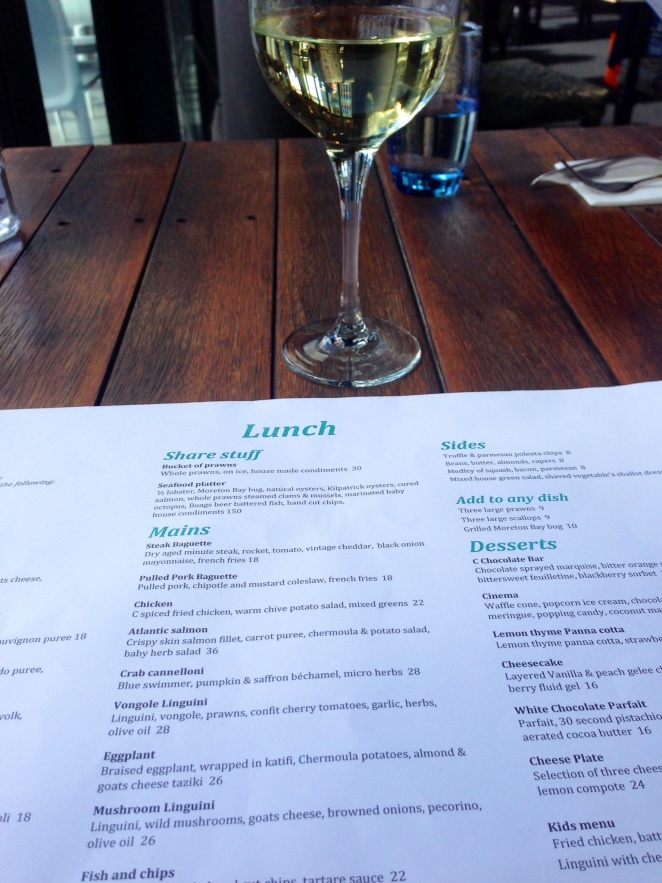 It was pretty quiet in there, with only 3 tables including ours. Which is perfectly fine, as we then had the full attention of the staff, who seemed genuinely interested in ensuring our dining experience was as enjoyable as possible. We could sit anywhere, so we chose a nice table for two at the window in the sun. The wine list isn’t all that big for wines by the glass, which didn’t make it any easier for A to choose her wine. The waitress suggested a few and bought both out for A to taste before she made her decision, I thought this was really great customer service. A chose a Pinot Noir from Paringa Estate $12, and I chose a Lenton Brae Chardonnay $10. The Pinot was lovely and light, perfect for lunch and my Chards was also great, woody but not too heavy and buttery. 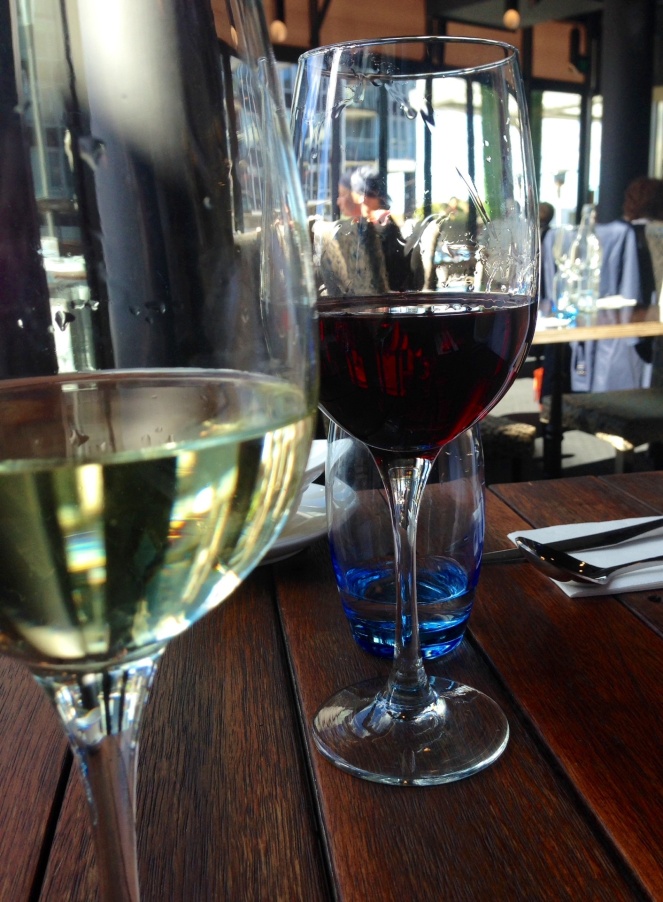 A decided to order two entrees as she couldn’t make her mind up, and I tossed up between the Pulled pork baguette with coleslaw and the C chicken, with potato salad. On seeing someone else’s chicken come out, the chicken won. 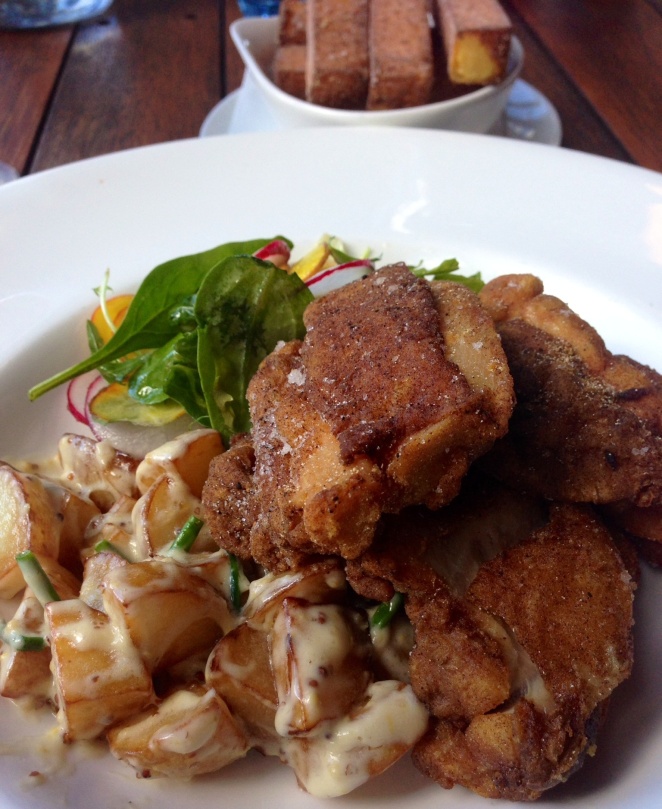 The C Chicken spiced fried chicken, warm chive potato salad, mixed greens $22 was, how shall I put it succinctly, yummo. It was hot, five spicey, juicy and it was a very generous amount for a lunch dish. With a crispy, crispy skin on each thigh, it was spiced chicken to perfection. The potato salad added a cooling element, which paired well with the chicken. The beetroot salad added freshness but not much else. But, I was there for the chicken, not the salad. I’d go back for the chicken too. 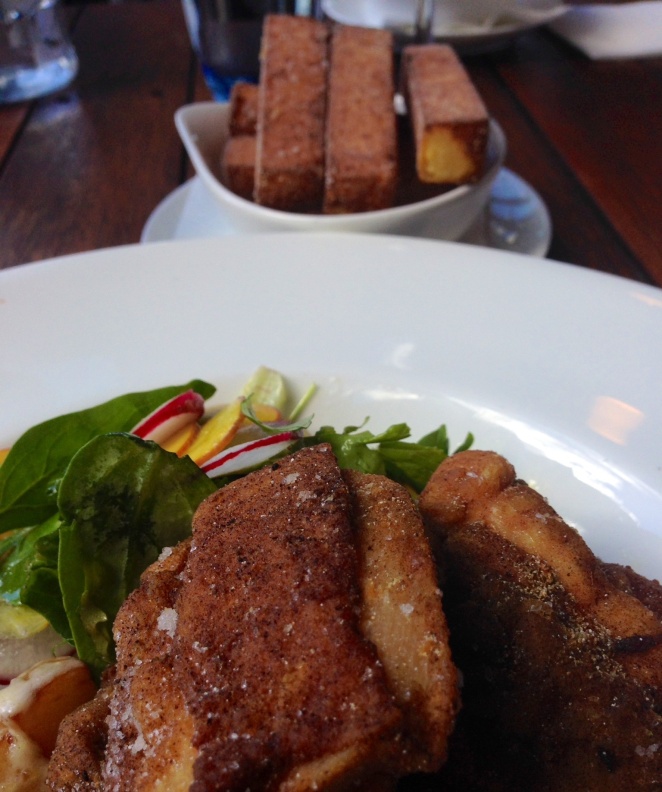 We decided to order a side of the truffle salted crispy polenta chips $8. Piping hot, crispy on the outside, fluffy on the inside, and dusted in truffle salt, these were delicious. I’m so going to try these at home with my truffle oil. Very moreish indeed. 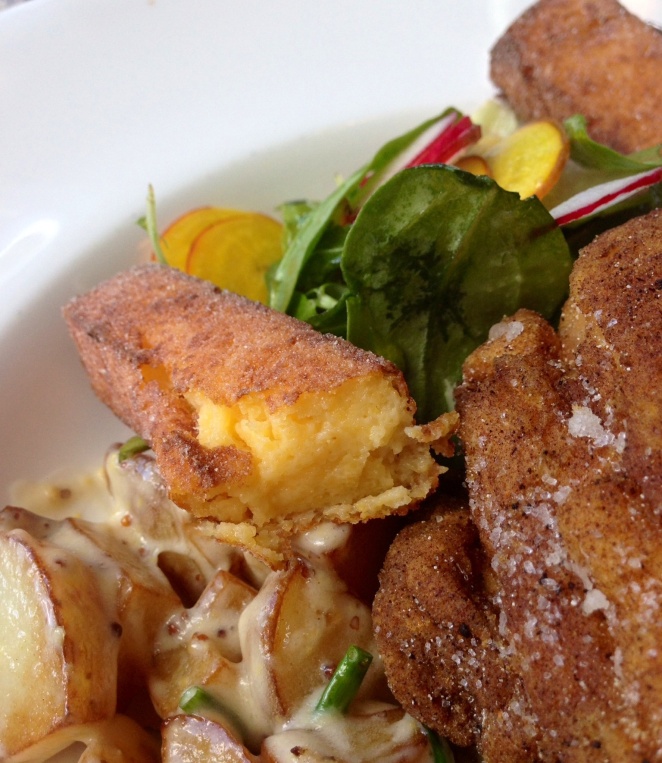 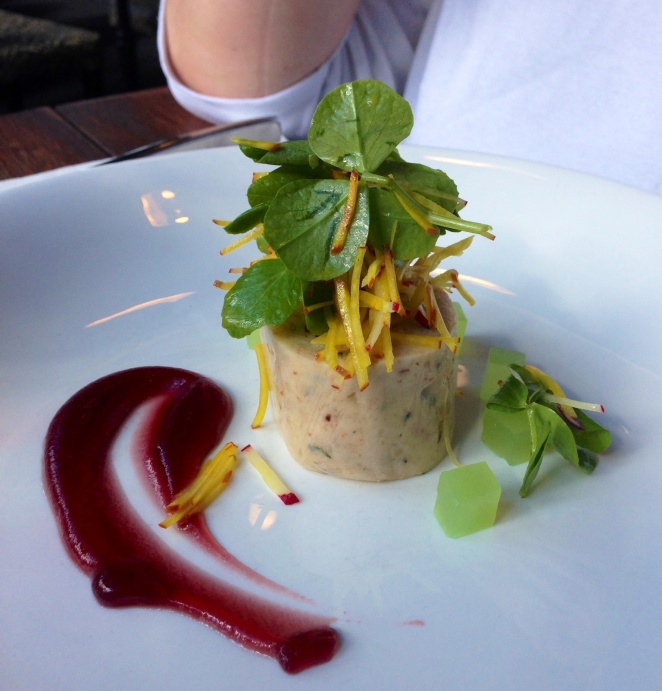 A had the Scallops & crab terrine $18 with apple jelly, beetroot & baby herb salad, Cabernet Sauvignon puree. I tried a mouthful of this and it was very meaty for a seafood terrine. The cab sav purée was to die for. This was a nice dish, with A oohing and aahing with each bite. 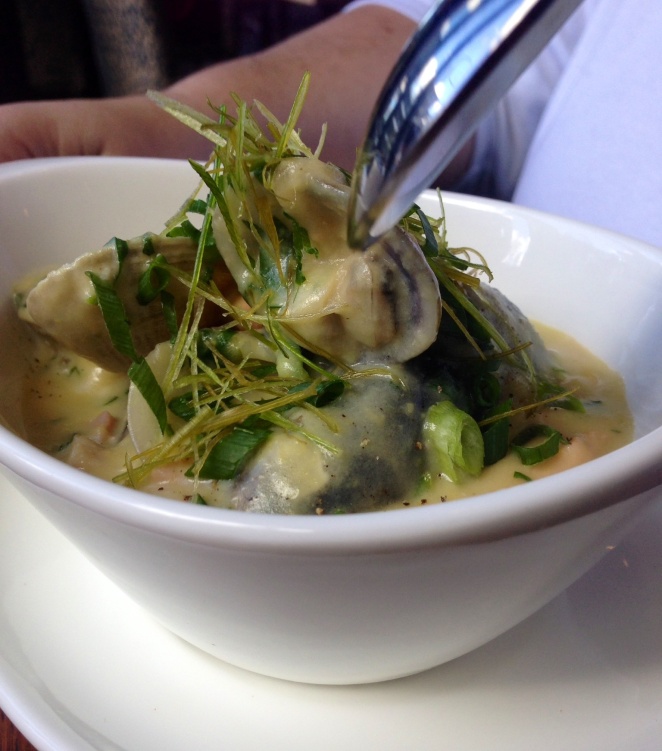 Her second entree was the Chowder $18 – Clams, salmon, mussels, corn, shallot, fried onion. Big chunks of salmon, a good number of molluscs and thick tasty chowder. It was a great mix of corny soup and fresh seafood. A used the polenta chips to get the last of the soup out of her bowl, and on tasting the chowder, you just don’t want to leave anything in the bowl. 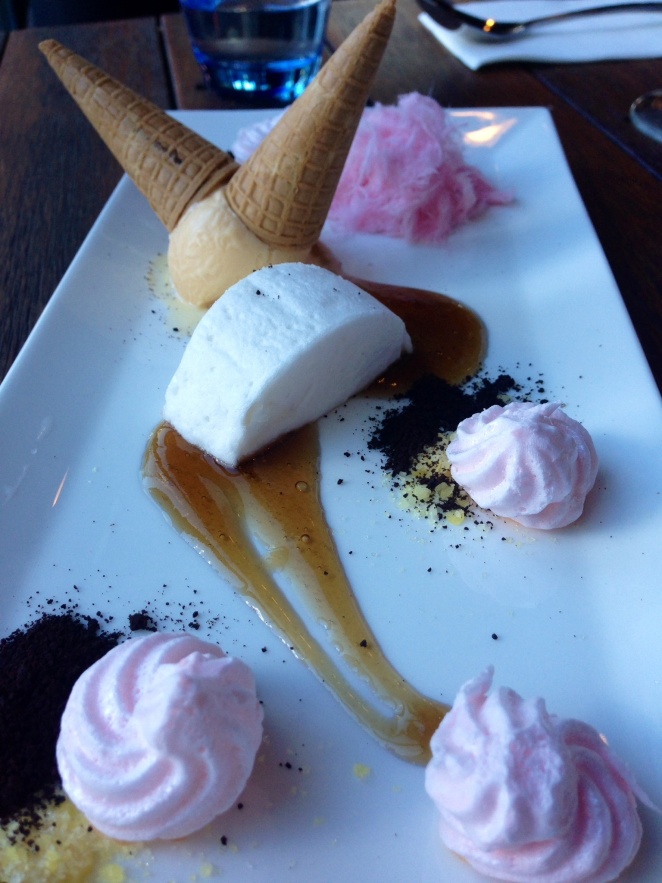 We decided to share a dessert, Cinema, Waffle cone, popcorn ice cream, chocolate soil, cola purée, raspberry meringue, popping candy, coconut marshmallow $16, as it caught our eye early on and it was recommended to us on asking. I’m not the biggest dessert eater, I’m not a sweet tooth, but A is and she was most impressed. I enjoyed the popcorn ice cream the most, and asked how they managed to get ice cream to taste like popcorn. They infuse the creme anglaise with popcorn for ages and it infuses with the taste, they then use this infusion to make the ice cream. I enjoyed this as it was bordering on savoury, just my cup of tea. 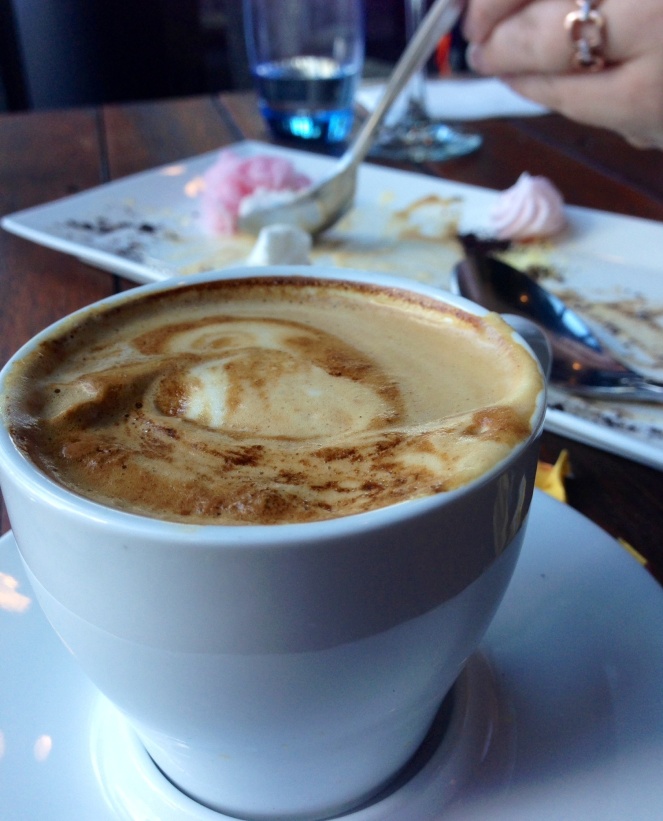 The coffee was hot and strong and good, just what I needed after a big glass of wine, if I was going to get any work done for the remainder of the afternoon. On A’s next sojourn back to Canberra, we will be returning for dinner. We had a great lunch, the food was fantastic and well priced, the service was attentive without being cloying and the surrounds were relaxing and enjoyable. 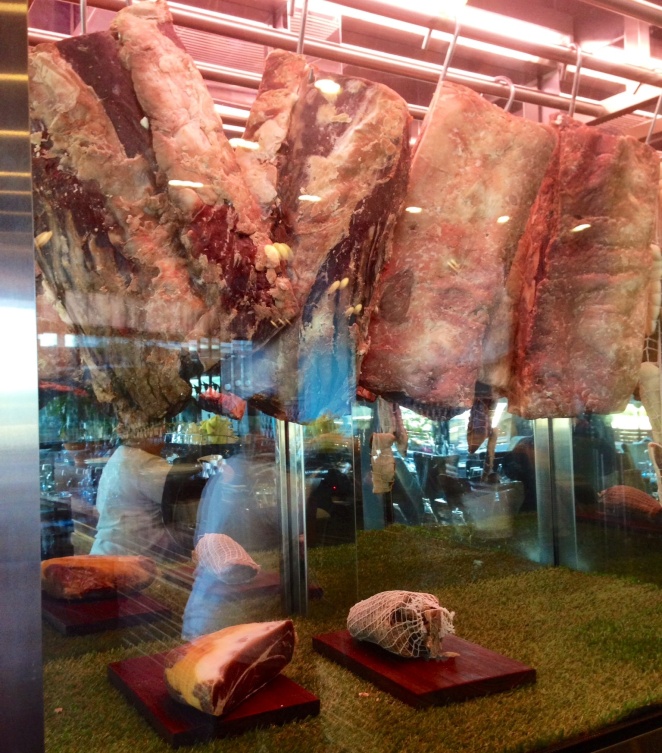 Plus, check out the glass case of meat. Drool. As we paid our bill, I just came out with it. I said to the waitress, Can I take a photo of your meat? She kind of looked at me, then saw me looking at this showcase of meat products, laughed and agreed. Classy. Of course I have to come back to check out the meat. It would be remiss of me not to. 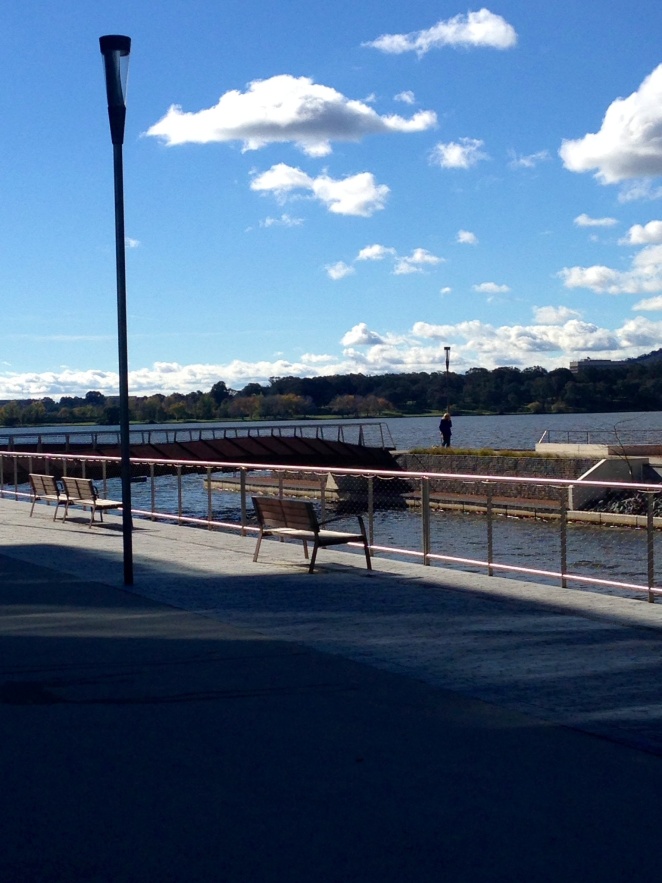